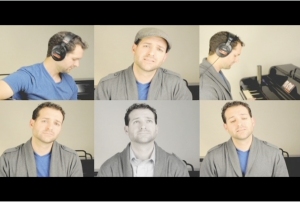 The process to begin writing my next musical has begun.

I have recorded a video of myself singing the second song from it here: http://www.youtube.com/watch?v=Pnui_AKn41w&feature=youtu.be

Let me know what you think. I have much bigger plans for filming my next show as I write it, but that information is too early in the development process to share at the moment.

Stay tuned and let me know if you are interested in being a part of my next work. 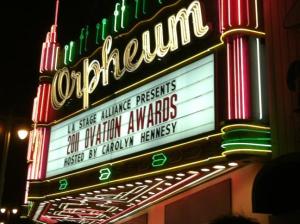 1 year ago today we had just begun rehearsals for six workshop performances of my first musical Group. Fast forward a year and the words “Group: A Musical – The Los Angeles Theatre Ensemble” is projected on the big screen at the historic Orpheum Theater at the 2011 Ovation Awards. It’s been a pretty great year.

As previously posted, https://adamemperorsouthard.com/2011/09/20/isaac-wades-portrayal-of-dr-allen-recognized-by-la-stage-alliance/, Isaac Wade (who I wrote the role of Dr. Allen for) was nominated for “featured actor in a musical.”

Isaac and I met up with our LATE friends at a downtown diner before the big show. I’ve got to tell you, those folks clean up REAL nice. (I’ll make sure to post one of the red carpet photos once they go up). Atfter commenting on how all of the “Gospel According to First Squad” cast had begun growing out their hair since the show wrapped, we hoofed it to the Orpheum.

After our red carpet shots (in which we forced the photographer to take one of as many of us as we could wrangle) we mingled in the gorgeous lobby hugging everyone we knew.

The theatre was stunning and the energy was palpable. We cheered like we were at a high school football game every time there was mention of any of our friends. Our faces hurt from smiling and our voices were raspy from hooting.

While we went home physically empty handed, I would say the whole experience was satisfyingly fulfilling. Just being invited to the party was such an incredible honor.

Hell, I’m still honored that such an esteemed theatre company gave me a shot in the first place, that anyone wanted to see my work and that it was well received. I feel inspired, invigorated and ready to continue edits and rewrites of my next shows.

I link to all of the deserving winners: http://latimesblogs.latimes.com/culturemonster/2011/11/ovation-awards-la-stage-alliance-.html

Error: Twitter did not respond. Please wait a few minutes and refresh this page.