Notes on Group… sort of 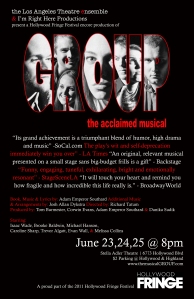 Obviously I can’t write notes on my own show, but I CAN talk about our opening night in the Fringe Festival.

Last night Group (http://www.hollywoodfringe.org/projects/452) opened at the Stella Alder and it was a riot! The audience was laughing early and often and our actors fed off it beautifully. I can’t wait to do it again tonight and Saturday.

Notes on the space: First off, it should be noted that the Stella Adler is a bit of a maze. We are in the Irene Gilbert space. I will make sure to put up more signs tonight and Saturday 🙂

One of the many things I love about Fringe is the madness of it all. Performing in a space that the actors are not familiar with is such a crazy challenge, and yet, I find it so exhilarating. The only time our actors have seen this space was in one tech rehearsal two weeks ago. That being said, they were up to the task. We have found, however, that the beautiful space is a bit of a sound suck (not a technical term) so if you are hard of hearing, I recommend sitting front and center.

The audience last night was made of AMAZING! They bought in right away, laughed at all the right spots, and (quasi-spoiler alert) were reaching for kleenex by the end. As the playwright of Group I really can’t express how moved I am by a new audience that is touched by our story. I don’t create work for myself. I create theatre to foster a shared experience. I want my audiences to leave having something to talk about, something to remember, something to chat about over pie afterwards… The immediate standing ovation (not started by my wife surprisingly enough) was a delightful and unexpected treat. I could not have asked for a kinder, more attentive audience.

Have I mentioned how much I love the Hollywood Fringe Festival?! I am so proud of being a part of this unbelievable experience.

We have two more performances left. Tonight June 24 and tomorrow June 25. If you are a fellow fringer or you saw the first run of Group, email me at aespiano@gmail.com and I can send you a discount code.

Here is the official page to buy tickets to Group. I really do hope you get a chance to see it. http://www.hollywoodfringe.org/projects/452

Notes on Girl Band in the Men’s Room 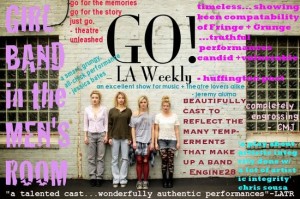 Girl Band in the Men’s Room is an hour long exploration into the diverse personalities that make up a band on the verge of success.

I loved the tight and clever writing and the fantastic character work all of the actors clearly put in. The acting and directing were stellar and the audience ate up every moment of it.

On a personal note, I wish I had sat nearer the stage as the Fringe Annex has plenty of visibility issues and I couldn’t see any of the lovely business involving a bass guitar and its strings. That being said, I really enjoyed this funny, smart and moving new work.

There is only two performances left, so you better get your tickets soon. The show I saw was sold out and I’m sure the next two will be as well.

Group officially opens tomorrow (Thursday 23rd) and runs for three days straight at the Stella Adler at 8pm each night.

Notes on The Trouble With Words

Holy Shit, this show is great. As long as Coeurage Theatre Company continues to market this as “pay what you want” this will continue to be the best deal in town. It’s downright gorgeous.

The Trouble With Words is a song cycle based around the concept of words – not finding the right words, saying the wrong words, last words, first words…

If you go to see musicals for a story, this may not be the show for you, BUT if you go to hear amazingly beautiful new songs performed professionally by a solid six-piece band and sung by gifted performers YOU NEED TO SEE THIS SHOW.

I’m excited to hear that Trouble will have an extended run at Actors Circle beyond Fringe so that I can take my wife and everyone I’ve ever met. I’m serious. The music is that good.

Tonight is the final dress rehearsal for Group at LATE’s homebase – the Powerhouse Theatre. We are allowing the gifted cast of The Naked Army come see our dress rehearsal since they have performances during our three day run. THEN tomorrow Brooke, Caroline and I are participating in the Fringe Cabaret in the main tent. We will be on stage from 9:30pm – 9:40pm. THEN we open on Thursday at the Stella Adler! 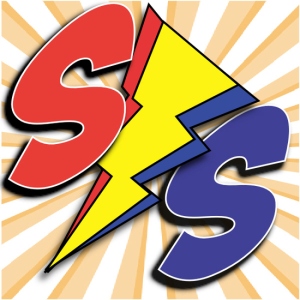 Adorable. This show is freakin adorable. I wish my son were a little older so that I could have taken him along for the ride.

The performances are heartfelt and just the right amount of over-the-top. The songs are fun and performed with vigor. The story telling is clever and funny. Most importantly, the kids in the audience had a great time (and so did the adults, lets face it).

If you want to just smile like a kid again, or better yet, you have a kid, go see this show.

There are only two more performances of this show left, Saturday the 25th and Sunday the 26th, both at 1pm at the Actors Circle. http://www.hollywoodfringe.org/projects/346

Tonight I’m seeing The Trouble With Words (with three friends no less) and then it’s back in Group mode for me with our official Dress Rehearsal tomorrow. I’m getting more and more excited for you all to see my show. Fringe rocks. Enough said.

Notes on Of People and Not Things

A couple breaks up and at least for one of them it felt like the end of the world, that is to say, until it was. This brilliantly written piece is essentially two epic monologues performed truthfully first by the man crushed from the breakup and then from the woman trying to sort through all that she has lost and all that she doesn’t miss.

This show is surprising well crafted and thought out. Each moment in the first monologue connects to something in the next and we see how subtle differences in experience can change everything.

I thoroughly enjoyed this moving piece. Of People and Not Things is clever, tight, moving and much funnier than the term “post-apocalypse” may imply. There are only three more performances and the show is only 70 minutes long so make sure you fit it into your Fringe schedule. I’m glad I did.

Tonight I’m going to be performing new and never before heard versions of songs from Group (some cut from Group) at Fringe Central with two of my actresses. We will be on the stage in the tent from 9pm – 915pm tonight. We will be back up there Tuesday 9:30pm – 9:40pm as well.

Monday is our full dress rehearsal and then we open on Thursday!!! I can’t wait for you all to see Group. Here is a link to where you can buy tickets to see our musical: http://www.hollywoodfringe.org/projects/452

Full Disclosure: Last Five Years is one of my favorite musicals of all time. The music is beautifully written and the concept is brilliant.

Bright Eyes Production’s Last Five Years does Jason Robert Browns moving masterpiece justice. The vocal performances of Ashley Cuellar and Rory Alexander are spot on and the live band is solid. These are important points as this show lives and dies on the quality of the performers. I turned to my wife during the second song and said, “We lucked out!” Ashley and Rory are wonderful.

It is a full-length one-act play consisting of almost nothing but music. It tells the five-year tale of two young lovers. We watch Jamie as he moves forward chronologically from when he first met his Shiksa Goddess till five years later. Meanwhile, Cathy’s timeline is the exact opposite moving from someone in pain to someone experiencing new found love.

If I have any qualms with this highly successful production it is with the often distracting and unnecessary projections and the unflattering wardrobe choices. These minor issues do little to deter me from recommending this powerful, moving, hilarious and brilliant production of one of the greatest modern musicals. Do yourself a favor and check it out.

Seeing a show like Last Five Years simply makes me want to gather up my actors and start singing songs from Group. Tomorrow I have a rehearsal with two of my actors who are going to sing with me on the Fringe Cabaret stage this coming Saturday and the following Tuesday. I’m still considering how many shows I’ll be able to see before my next schedule fringe show, which is a double header of Super Sidekick and Trouble with Words both on Sunday June 19th.

Notes on Voices From Chernobyl Jr

The task of writing a show for children about the Chernobyl tragedy must be daunting but you wouldn’t know it from this lovely production. Cindy Marie Jenkins’ deft writing bridges the gap between an educational presentation and an interactive children’s show that is as funny as it is serious.

The particular preview that I had the pleasure to see had an adoring adult audience, but Voices From Chernobyl Jr is tailor made for children eight years and up. I highly recommend this show for parents and children alike. It is equal parts entertaining and important.

We had an amazing rehearsal of Group last night. My anticipation for it to be June 23rd already is getting a little ridiculous. Speaking of anticipation, I’m bringing a pack of people to see Last Five Years tonight. Cannot wait.

Spring Awakening is a coming of age story featuring the tragic results of negligent parenting during puberty. This tragedy is surprisingly funny under the skilled direction of Dana Murphy and Patrick Riley. I’m not sure which director was responsible for the bulk of the staging for this production, but whoever first decided to use every inch of that space should be commended. It was brilliant.

I would be remiss if I didn’t mention the many young and promising actors who give powerful and honest performances throughout. I was particularly impressed with leads Patrick Riley and Jennifer Allcott whose truthful portrayal of two youths mystified by love are a must-see.

I regrettably won’t be able to see any shows tonight (June 10) as we have a rehearsal for Group all night. It’s one of only two more rehearsals we have (excluding tech and dress) before we open on June 23rd!

For tickets to see group: http://www.hollywoodfringe.org/projects/452

Here are some photos from our weekend rehearsal at the Powerhouse Theatre. (The amazing paint job was done by our very own Brooke for an amazing retelling of Lysistrada called “The Naked Army”) 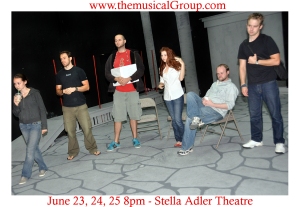 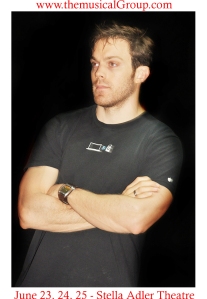 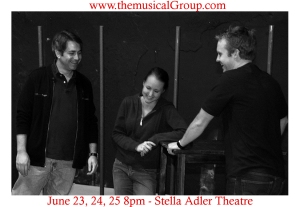 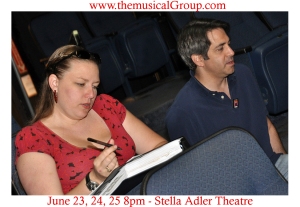 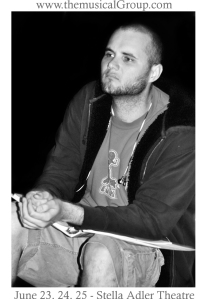